The Time We Met Spock!

My Dad is  a career pilot.

Back in the day, while moving up in the professional aviation world, he decided to spend a Saturday off helping his pal, Mike, who was coming along with his own piloting development. The two rented a Piper one-engine, four-seater—which meant there was room to bring my brother (7years) and me (10) along. 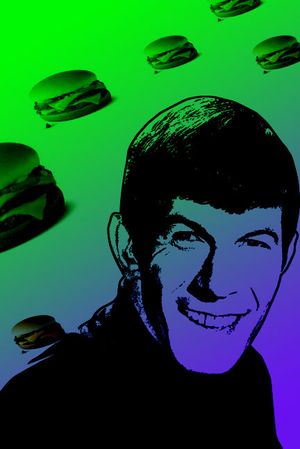 "Guys, today we're going to Catalina Island. Wrigley Gum used to own the island." He said, as we threw ourselves aboard and buckled-up.

Now, Catalina is an island about 45 minutes off the coast of Southern California if you fly it from San Diego, while working on minor flight assignments as part of the agenda. As we approached the island which jabs it's way out of the Pacific Ocean as a tall jagged mountain, Dad informs, "See that part right there? That's the airport. The runway goes from that cliff edge to that cliff edge over there...." delighted at the opportunity. These cliff edges are a shear 200? 300? feet from the ocean surface.

Understanding what he's saying, I start to wonder things like: "How does one land a plane on a golf tee in the middle of the ocean?" This is a landing strip? Wow. And since my Dad is absolutely 007-cool in real life, I bail on my doubt. I can't wait to see this landing happen.

"Well, hello Mr. Spock! What are you doing here? Shouldn't you be up up on the Enterprise flying around the universe and stuff?" This was the era when it was on TV and a major hit. Spock is a cult hero to any young boy at this time—on the pointy ears, alone. A REAL Vulcan.
Logical.
Logical.
Illogical.

He looks at my Dad, giving him (in what I perceive, now,  in my mature retrospect as a) "Dude, I'm on my day off" sort of a look. He then looks at us and gives in for the benefit of the kids, so-to-speak, super cool...... relents into character and says:

"eh hem... Well, you see, the Captain, Dr. McCoy and I are all very hungry and we couldn't decide who should get lunch. So, we drew straws to see who's turn it is to beam down for buffalo burgers. Logically, I drew the short straw, so, here I am."

My brother and I lose our minds, frying in the moment. Looking at his ears.... knew it! We turned to each other, freaking, my brother and I, excited "Wow, wow it's him! Oh my God...wow oh wow and all that....."

"He got his burgers and thy beamed him back up to the Enterprise." Dad explained in and "of course" elephant-in-the-room logic and cool.

I hardly remember eating the burgers. And I don't remember flying back to the coast from the Island. But, I still make the Spock hand sign, whenever possible. Logically.